There are four types of tables in MS SQL:

Full details of how to work with all these tables are covered in our SQL courses.

The syntax given below is used to create a local temp table in SQL Server:

And select records from that temporary table:

After execution of all these statements, if you close the query window and again execute “Insert” or “Select” command, you will see an error similar to:

This is because the scope of local temp table is bounded with the current connection of current user.

Below is the syntax for creating a global temporary table:

Local and global temporary tables are stored inside the Temporary Tables folder of the tempdb database. 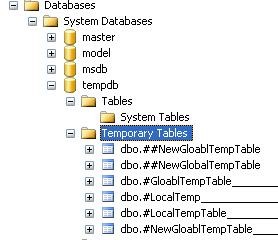 If you look closely look at the name of the temp tables,  you will see a ‘dash’ and ID as part of the name:

SQL server does this automatically to be able to differentiate between the different user sessions; you can ignore this and refer to the table name only.

Step 1. Create a temporary table named OccupationCount and at the same time populate it with summary data from the existing table:

Step 2. Create another temporary table named CountryCount which lists the number of people in each country for each occupation.

Step 3. Use the 2 temporary tables to list the percent of people in each country  for each occupation:

FROM       #CountryCount a inner join

Note: You can use Format to display the percentage symbol and you need to cast the count as a decimal to see the decimal places.

FROM      #CountryCount a inner join

Below is the syntax for creating and using Table variable.

You need to run the three statements together. If you try and run them separately you’ll see a message similar to the following: